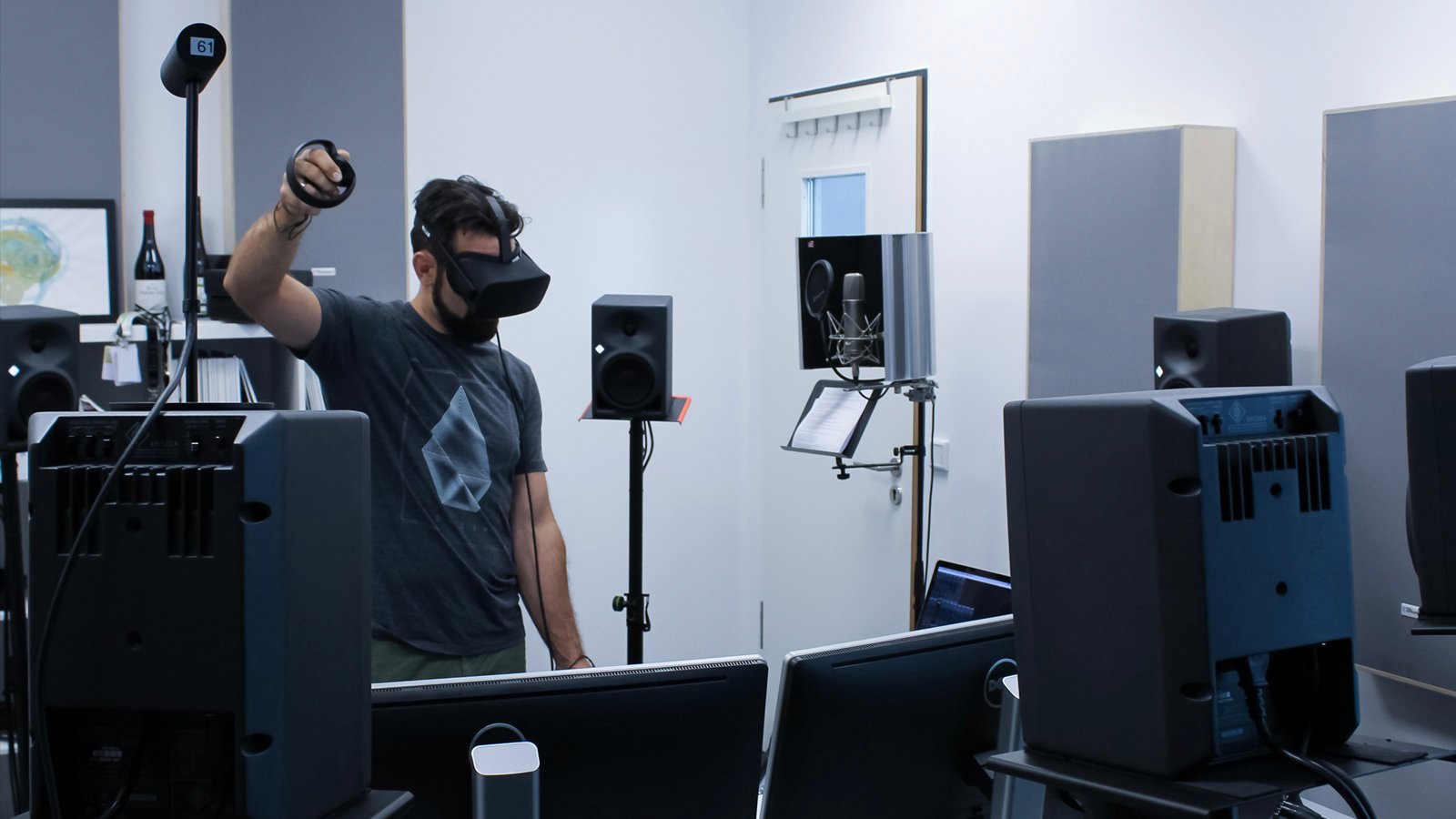 Michael, can you give us some general facts about the project?

“Yes – of course. Last year, I mixed the song “Berlin Walls” of the band Monotronix. Monotronix is a live and studio act founded by drummer Hendrik Lensing and producer/keyboarder Julian David. Electronic beats and hooks collide with live drums and visuals, exploding on stage as a collective music experience. For the mix I used the original stem mixes provided by the producer Julian David and processed them using the dearVR PRO VST plugin which was controlled by dearVR SPATIAL CONNECT.”

“My creative approach for this mix was to use only natural rooms within dearVR PRO to give an impression of the engine’s capabilities and rather avoid traditional reverb FXs.
I applied the following rooms to the stems: Warehouse, Kings Hall, Cathedral, Staircase, Car 1&2, Cellar, Small Living Room, Outdoor Street, Large Recording Hall.” 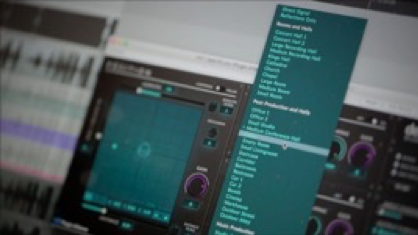 Can you give us some insights about your post-production process in the past?

“The post-production in the 3D world has always been shadowed by the circumstances of fiddling around with 2D user interfaces for 3D. These approaches never really felt 100% intuitive to me. Especially positioning the virtual sound sources, writing and correcting the automation data was still an unnerving and time-consuming process.”

How does dearVR SPATIAL CONNECT help you in your daily work?

“Utilizing the new dearVR SPATIAL CONNECT I am now able to mix physically in a real 3D soundfield. Being visually guided in VR via an HMD (Head Mounted Display) is so much more intuitive, and especially multiple times faster than working traditionally with a mouse in a DAW environment with a 2D screen and equirectangular video. Spatial Connect is the next step moving forward in the 3D post production towards a more intuitive production workflow.”

Can you share some insights about the positioning of the instruments and the singer?

“I gave the recorded acoustic drums, the lows and kicks a static position due to time and low-end pressure reasons. In addition, I wanted to have an acoustical fixing point to have a stable orientation. The lead vocal was also rather static to emphasize its monologue/prayer-like attitude. I followed this approach till the end when he leaves the cellar. Everything else is animated and moving.”

What about automation data?

“All automation data was written using dearVR SPATIAL CONNECT with one exception: For the monologue of the lead vocals at the end of the track I used some additional envelopes that haven’t been implemented in the Beta yet.” 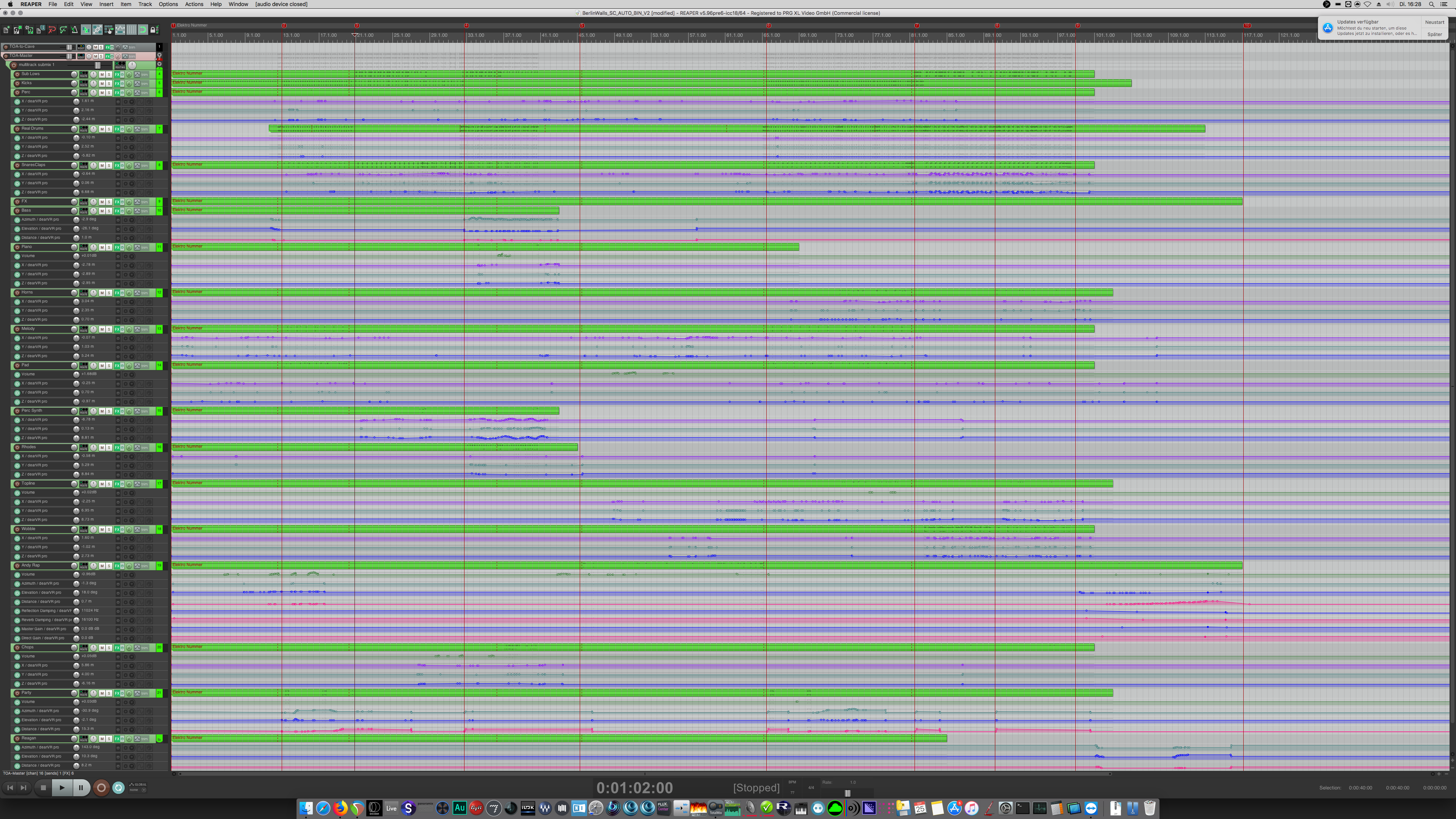 Did you use any additional software?

“Last year I worked on this mix using dearVR PRO’s TOA (Third Order Ambisonics) mode and decoded the signal via Blue Ripple Rapture 3D Advanced tool to the 3D cave and to the audiosuite 7.1 loudspeaker setup.
Doing this project again, I’d stay in dearVR PRO and select the multi-channel output mode which is currently in Beta. Using this new feature, you won’t lose spatial information when converting Ambisonics to multi-channel.”

How would you evaluate the workflow?

“In general, mixing “Berlin Walls” was easy due to the quality of the stems.
Creative elements like slap-back-delays and delay-FXs have already been rendered into the stems by Julian. There was no need for any further dynamic or EQ editing.  This comes close to my general approach working with immersive audio and spatializing audio content.
Be it in real-time or in post-production: All standard sound editing and mixing should be done in an earlier stage in the signal chain before 3D rendering takes place. So you can concentrate on building the 3D impression of the soundscape.
It is also important to mention that I never had any audible artifacts, no matter how fast any of the content was animated in its position.”
Summing things up, I can strongly recommend dearVR PRO and the combination of the plugin with dearVR SPATIAL CONNECT to 3D audio related sound engineers. The combination really opened a new world of how to work and interfere with the spatial audio world.”

Can you tell us more about the time required to finalize a 3D production?

“ It is really a single operator system. Compared to standard linear post production, standard timings and needed staff is comparable to 2D post production. As soon as all tracks are done, you just need an additional time slot for spatialization and automation. Any important parameter you need can be easily accessed via Spatial Connect.

What benefits do you personally experience working with Spatial Connect?

“For me it is a fast and intuitive controller to optimize especially TOA based soundscapes that are rendered with dearVR PRO. Combining architectural pre-renderings of event locations as an video overlay for dearVR SPATIAL CONNECT, the pre-production for installations and events becomes more and more realistic and as close as possible to the actual real installation as one can get. This enables me and the final client to experience how the overall installation will look and sound like.
Furthermore, the standard 360° video post-production workflow will benefit. Mixing for 360° video content will now move on from just guessing by looking at room angle overlays on a 2D equirectangular video within Reaper or Nuendo, to actually seeing the video material in 3D VR and being able to position the sound sources as intuitive and precisely as one can think of." 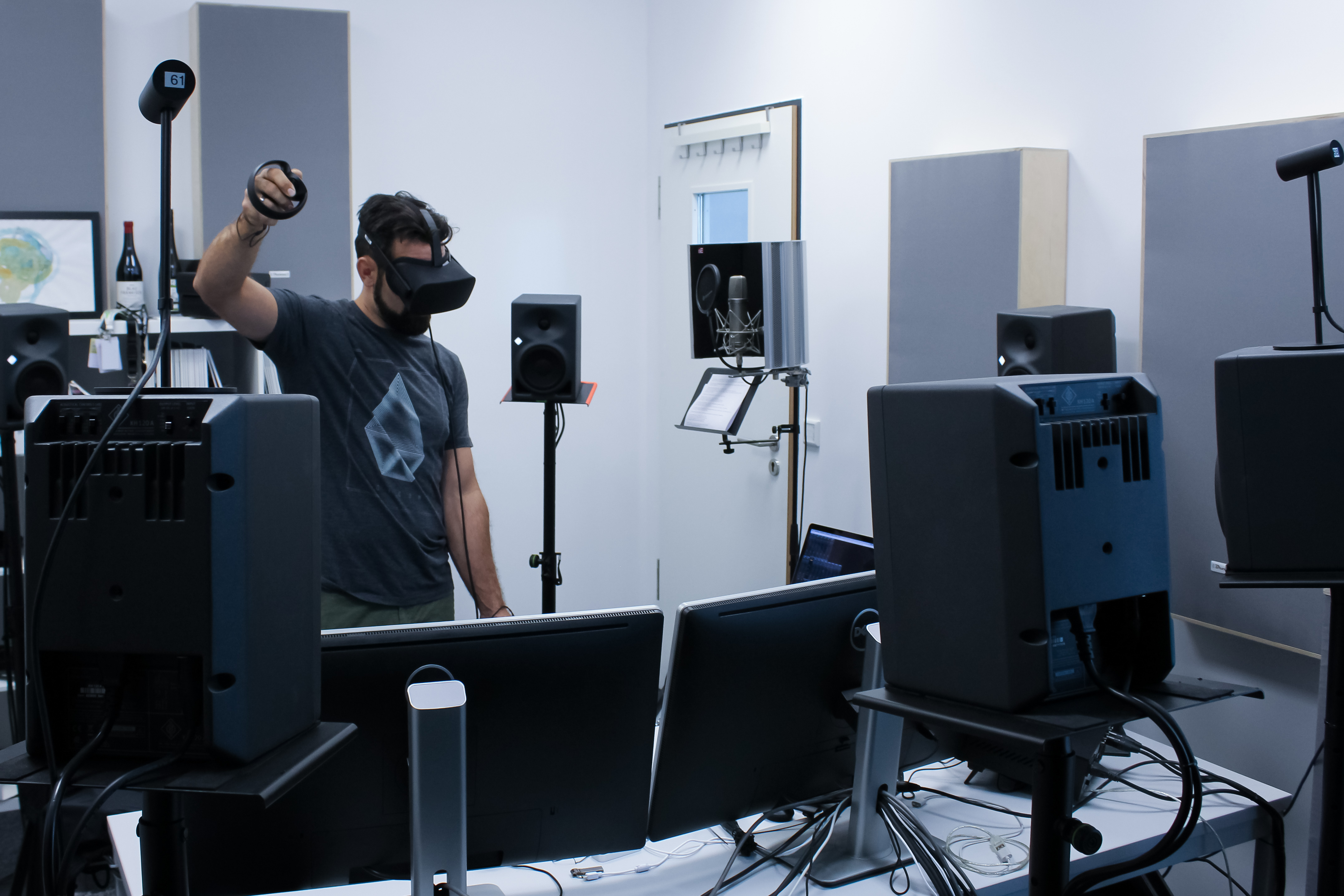 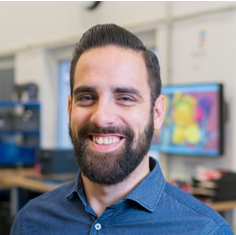 Before working in the field of non-standard, technology-based, audio solutions for events, Michael was working as a FOH and system tech in the international automotive and corporate sector, as a system tech for large scale R&R touring shows and festivals, as well as a FOH engineer for several artists e.g. Karl Bartos (former Kraftwerk as TD & FOH). His expertise covers 3D audio for immersive real-time applications and installations, 3D audio for VR/AR, generative and interactive audio and the therefore needed technical and acoustical system planning. Having worked for the PRG Labs, Michael now works as an audio engineer at TDA Rentals GmbH which is one of the biggest live reinforcement companies in Germany. Furthermore, he gives lectures at the University of Applied Sciences Duesseldorf for electro acoustics and sound reinforcement systems. 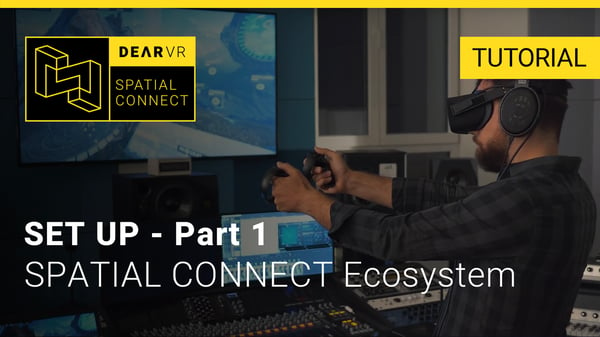 Let’s dive into the 3D world. As it is the case with every innovation, starting sometimes can be a bit bumpy. To enable you to have a smooth introduction. 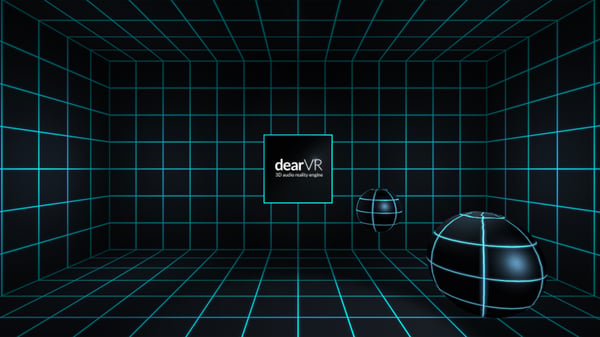 Let’s talk about stereo and mono source material in spatial audio. You have a virtual world. You use a spatial audio plugin to realistically place sounds.

BE THE FIRST TO HEAR ABOUT A NEW ARTICLE