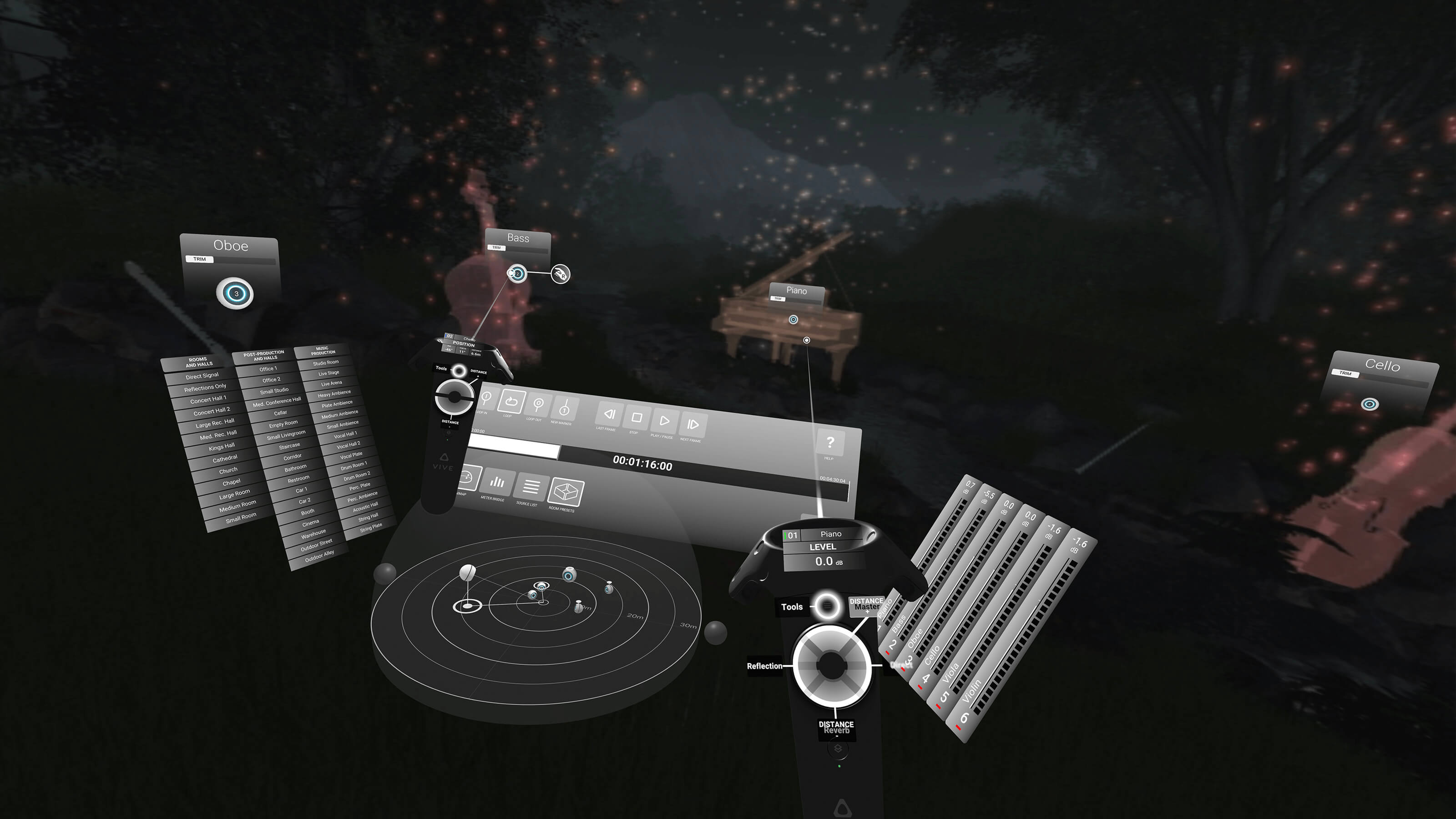 Immersive audio formats are offering us many new creative opportunities and tools as they simultaneously become more and more realistic. However, when mixing audio for multi-channel loudspeaker setups with height channels, traditional workflows using mixing desks with pan pots and joysticks often hinder us from having an intuitive production process. In this article, we want to show you how dearVR SPATIAL CONNECT helps you overcome these technological barriers by enabling you to intuitively mix audio for immersive linear and interactive audio formats.

In its essence, dearVR SPATIAL CONNECT is a standalone application which enables you to directly control your DAW in a VR environment. Whether you want to deliver a binaural, an Ambisonics or a 7.1.4 mix, you can now see and control your audio tracks within a VR headset. With dearVR SPATIAL CONNECT and a direct visual representation of your audio session, your workflow will speed up and you will feel more empowered to work creatively within immersive audio formats.

It’s this simple: use the VR controllers in your hand to control the spatializer plugins dearVR PRO, dearVR AMBI MICRO, or the Nuendo VST MultiPanner. That way you can easily position audio objects in a 360° space and even draw complex automation lines. The virtual faders and the meter bridge allow smooth and individual levelling while the direct access to your DAW controls, like solo and mute, as well as transport and marker functions, enable a faster workflow.

dearVR SPATIAL CONNECT can also run on the same Windows machine which hosts your DAW.

Alternately, the application can be installed on a separate VR-ready computer. In this kind of two-machine setup, the DAW runs either on a Windows or a Mac machine and both computers are connected by a common network. 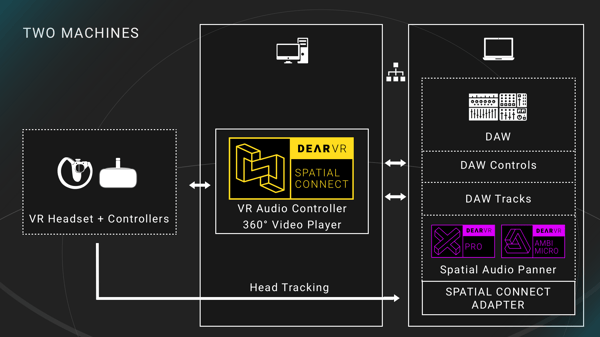 Using a VR headset offers immediate headtracking. Headtracking enables us to integrate the listener’s movements into binaural rendering in real-time. This results in a steady soundfield, which reflects a real world acoustic environment and contains enhanced externalization.

dearVR SPATIAL CONNECT supplies the DAW session with the head-tracking data derived from the VR headset. When you turn your head 180°, sound sources previously located in the front will now be perceived from behind. Headtracking is available for DAW tracks that hold a dearVR PRO or dearVR AMBI MICRO instance or for the NUENDO VST MultiPanner.

In addition to the visual representation in the VR headset, dearVR SPATIAL CONNECT can be operated on any common display in 3 different view modes:

As already mentioned, you can also use dearVR SPATIAL CONNECT alongside 2D video content. This view-mode comes in handy if you want to judge your 3D-audio mix next to a 2D movie while still taking advantage of the whole 360° sphere for your audio mixing. You can also use dearVR SPATIAL CONNECT without any video content, thus simulating a virtual environment like a cinema or a high-end studio. 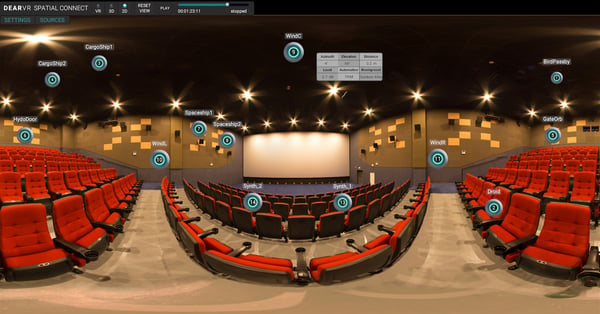 In dearVR SPATIAL CONNECT you can see both spatialized 3D dearVR sources as well as non-dearVR sources of your DAW session. Both sources are represented by visible objects, which can be grabbed, repositioned, and automated.

When wearing the VR headset, different modules are available as interactive mixing panels. These modules provide you with the enhanced functionality of the VR-mixing workflow. You can individually position all these modules by simply grabbing and dragging them to your desired position.

The transport module is the main module of dearVR SPATIAL CONNECT and is always visible in the VR space. It gives you the essential transport functions known from your DAW. From here, you can also activate all the other VR modules.

As the mixing session grows in complexity, you might want to get yourself an overview of all our audio sources. This is where the Minimap comes into play. The Minimap is an interactive miniature view of the whole mixing session, which reflects the surrounding VR space like the 360° video, audio sources and the automation in real time.

The source list provides an overview of all the important data of your session within VR. It is divided into DAW-related parameters (left side) and 3D audio AAX/VST/AU spatializer plugin dearVR PRO (right side). You can also access basic DAW channel functions like solo and mute status, the level of each audio source, and the automation mode. In addition, within this view, you can control the most used features of dearVR PRO like Azimuth, elevation, distance as well as the selected room preset.

The meter bridge brings the traditional mixing console to the VR world. You can directly monitor and level your audio sources from here. In addition, you can change the levels by selecting the channels and moving your hand up or down.

dearVR SPATIAL CONNECT can be controlled by the HTC VIVE, Oculus Rift and Rift S. The controllers can switch into different modes, each of which changes the functionality of the controller. Based on the selected function, you can control the position of an object, change its level, solo and mute objects, and change the individual automation status. 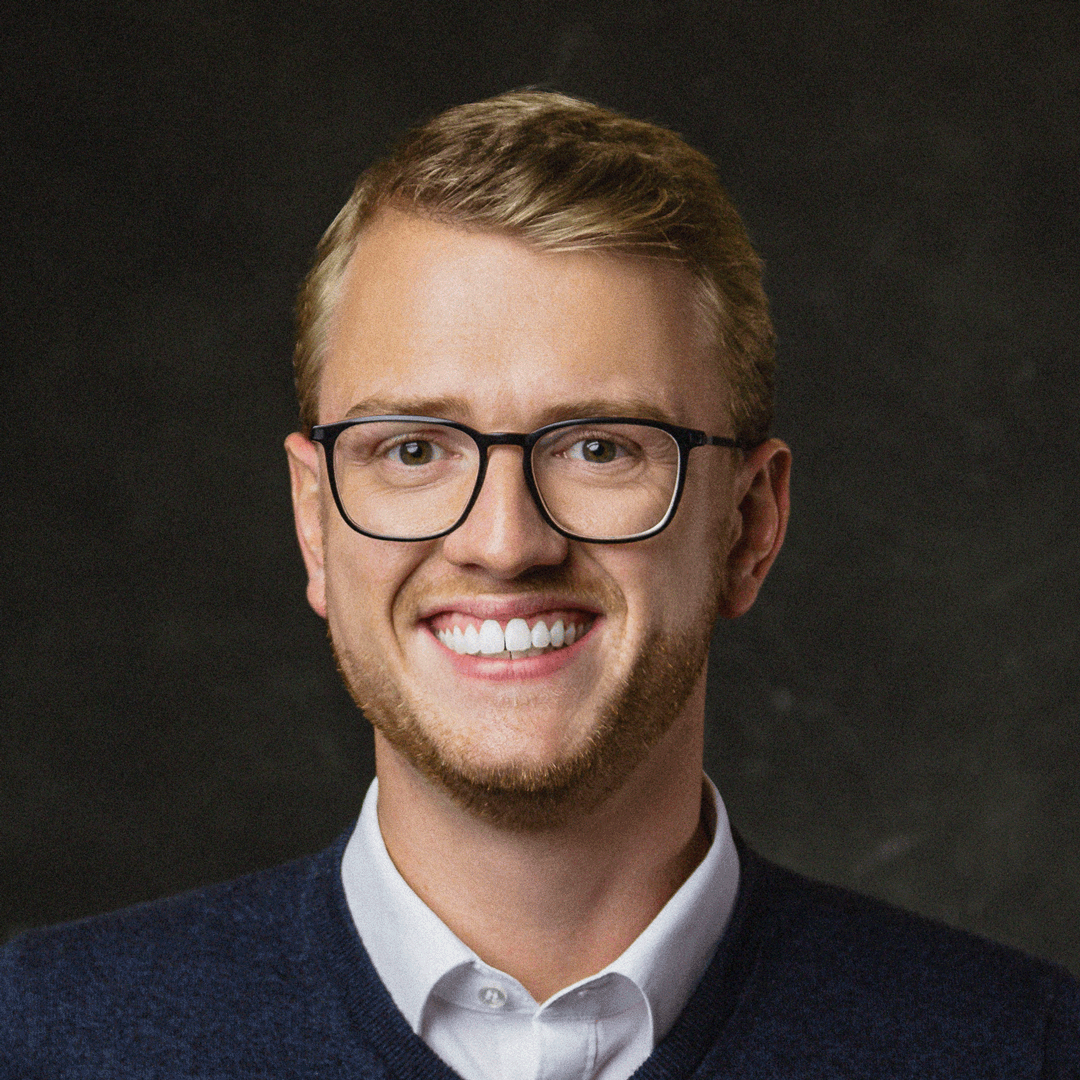 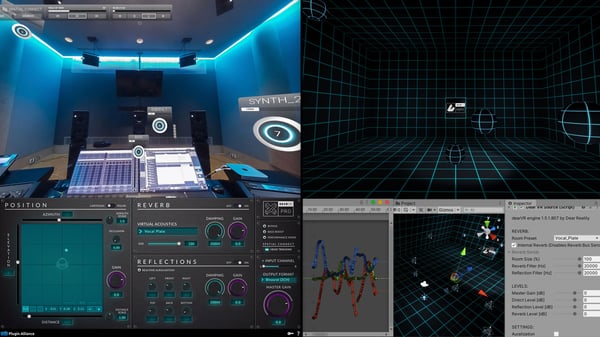 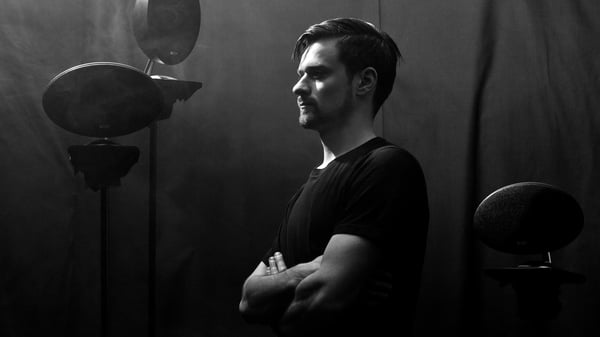